I've now completed an essay on another blog dedicated to that purpose:

It's about the language often used within the art world, sometimes called art-speak.  Though I say it myself, it's a good read.  Please check it out!

I will resume normal service on this blog now.    Got some catching up to do!

A total of 41 post-war public works of art were "listed" by Historic England yesterday (22nd January).  Here's the announcement:

I need to post something on it so this is a placeholder - will try and find time in the next couple days.
Posted by Peter Heywood at 22:03 No comments:

This 2013 Guardian article about artist statements resurfaced on Facebook yesterday.

Good stuff, although I would question whether artist's statements are needed at all.  As I've said in a previous post, I think they can be a bit of a cop-out in two respects:
I love this remark in the Guardian article: "Academia is only one part of the art world."   To me, it seems like one of the more pretentious, snobbish parts - and the art world seems full of pretension and snobbery.


This is a dialect of the privileged; the elite university educated. If you can't write it effectively, you're not part of the art world. If you're already inside but don't understand it, you're not allowed to admit it, or ask for further explanation. This kind of rhetoric relies on everyone participating without question. To speak up would mean dissolving the space between inside and outside: quite literally, the growing boundary between the art world and the rest of society.

Posted by Peter Heywood at 08:40 No comments:


Stuff I’m ashamed not to have known about already:

“is a place that lets you explore, document and share your creations”. Exactly my cuppa tea!

A past website aimed at enabling retired people to pass on their skills. Now owned by Autodesk


Lots of stuff on new age design and making.

Look at its sustainability workshop.


“Democratic design” – getting other people to collaborate with you to refine designs and make them.


I am having real trouble dealing with recommended reading in the Context of Practice course I'm doing.

I've ended up buying 5 books and all of them are written in a "scholarly" style that really gets on my goat.

By "scholarly" I mean that the books are packed with references to other studies so I come away with the impression that I'm dipping into ivory tower stuff - a bunch of academics more interested in each other's work rather than helping an outsider like me understand what they're going on about.

In fact, I get the impression that these folk deliberately set out to make their musings hard to understand by the likes of me by using:

I find it very difficult to maintain my concentration.  I drift off and eventually realise that I've "read" several pages without taking in any of it.

It's not as though I struggle with reading and writing.  I was a journalist and editor for 30-odd years and followed rules like these:

In other words, the exact opposite!

So here are the 5 books I've been struggling with:

(1)  "Designing Things: A Critical Introduction to the Culture of Objects" by Prasad Boradkar.
I got to page 65 and seized up.

(2) "Design Studies: A Reader" by Hazel Clark and David Brody
I started reading the introduction of this one, then leafed through it thinking "mmmmm"

The above were recommended by Sally Hall, our temporary lecturer.  She seemed quite down to earth  so I was hoping the books would be, too.

The following ones are "suggested reading" in our assignment brief:

(4) "Scale" by Andrew Herod
I asked for this as a Christmas present.  The people that gave it to me were impressed - said they couldn't understand it.  Maybe I could if I dedicated a lot of time to it but I can't be arsed.

(5) "The Craft Reader" edited by Glenn Adamson
Another Christmas present.  It looks a little less intimidating but it's 630 pages long.

Here's what bothers me about these books:

Our lecturer acknowledged that our recommended books were above our level, more suitable for PhD types and recommended the following as easier reads:

“Making is Connecting: The Social Meaning of Creativity, from DIY and Knitting to YouTube and Web 2.0” by David Gauntlett

“Beautiful Thing: An Introduction to Design” by Robert Clay

This follows on from my previous post, which gives the context. 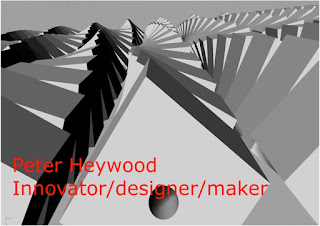 Point 1:  I'm not just a designer/maker.  I think my imagination, my ability to dream up ideas and think laterally is my biggest asset.  I'm an innovator/designer/maker

Point 2: I have an unusual combination of creative and engineering skills.  This has a strong influence on WHAT I choose to design and make and HOW I go about it.  This slide shows one of the results - a project I'm working on now. 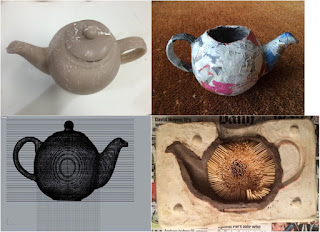 Point 3: I don't want to specialise in a single material.  This slide shows another project I'm working on -  making teapots out of unusual materials.  I've shown  wax, paper mache, plywood, cocktail sticks but I also plan ones in chocolate, lead, tea and, well,  you name it, I'll try it! 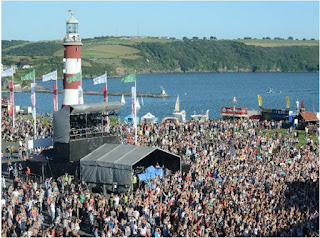 Point 4:  I want to play to the gallery.  I want my art to be accessible. 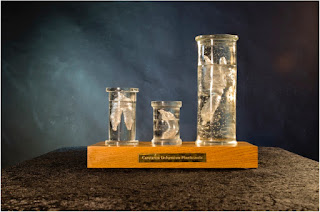 Point 5:  I want my art to intrigue and amuse people.  I made this earlier this year.  It's the ghosts of deformed carrots, eaten by slugs in my garden.  The carrots are no more but the space they once occupied is preserved for future study in these cast glass specimen jars. 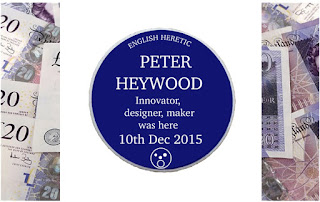 Point 6:  I want fame rather than fortune

Point 7:  The top of the plaque says "English Heretic" rather than "English Heritage".  I'm a heretic - a non-believer - in various things.  For instance, I'm sceptical about a lot of art theory and think  some modern art is a case of "emperor's new clothes".

Posted by Peter Heywood at 14:42 No comments:


I've spent the last few days in London where I visited various art exhibitions, among other things.  Here's my thoughts:

The Amazing World of M.C.Escher at the Dulwich Picture Gallery.

I've listed this first because I liked it the best.  I love everything about Escher - including the fact that he is sometimes viewed with snobbishness by the art elite, some of whom (apparently) consider him merely a highly accomplished graphical technician.

I love the way he's so meticulous, the way he doesn't fit into any of the art genres, the way his work appeals to the masses, the way it intrigues and amuses the viewer. 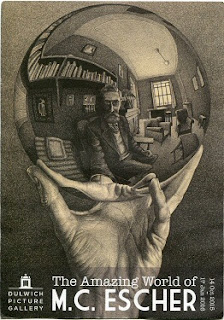 "Performing Sculpture" by Alexander Calder at the Tate Modern

Calder pioneered the use of wire to create sculptures that are almost like 3D line drawings. 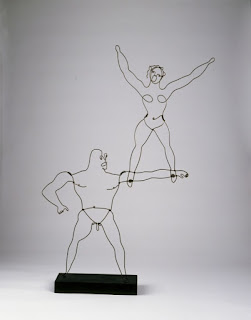 He's probably even more famous for his mobiles, also often made with wire. 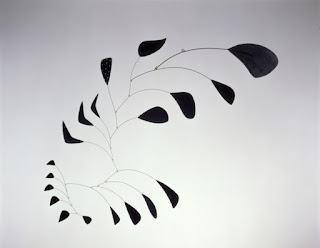 I love his stuff.  I keep on meaning to give mobiles a go myself.

I was a bit annoyed with the Tate over this exhibition.  It charges quite a lot for entry (I paid £14.50 for an OAP ticket without a donation).  Then it charges quite a bit extra for an audio guide (I decided it wasn't worth it.)  Then when I got inside, I was stopped from taking a photo!

Ai Weiwei at the Royal Academy

I liked the way I was allowed to take photos in this gallery.  But what do I think of Ai Weiwei's work?

A lot of his exhibits are (a) protests about the Chinese government and (b) recycled material of various sorts - from straightened reinforcing bars from buildings that collapsed in an earthquake to recycled antiques ranging from furniture to parts of ancient temples that have been demolished to make way for urban development.

There were quite a few references that struck chords with what I'm doing on my "Teapotty" project  .  For instance, he recycles antique tables so 2 legs are on the floor and 2 are on the wall, or there are some other modifications that undermine its assumed function - much the same as my choice of unexpected materials renders my teapots unusable.

Similarly, the surface of some of Ai Weiwei's work is intriguing: 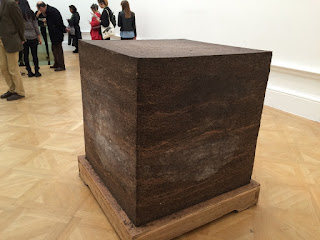 This is a ton of tea, compressed into a 1-metre cube

This is an arcade of home-made coin-operated machines built by enthusiasts.  I took a video of one such machine, in which Nicholas Serota, director of the Tate museums and galleries, makes judgements on whether submissions should count as art:

This is last and least, in my view.  I had an hour or two to spare so I thought I'd see what Damien Hirst's new(ish) galley was like.  It's quite out of the way and when I was there it was very quiet - maybe a dozen visitors total.

I just don't "get" John Hoyland's work - large canvasses with rectangles of different colour paint on them.  They are strong colours.

Guardian article by Jonathan Jones (a Hirst-hater): "John Hoyland: why is Damien Hirst opening his new gallery with this second-rate artist?"

Posted by Peter Heywood at 15:48 No comments: