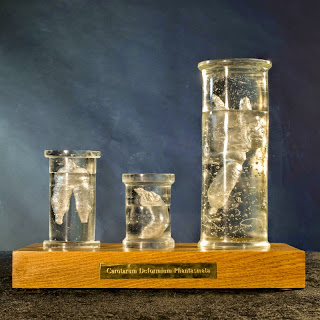 Please see my online photo journal.  The comments below will make a lot more sense if you do this!

I give myself the following scores out of 10 for this project:

I started this project thinking I would try and create something that worked on 2 levels – it was appealing to look at and it made people think.

On the appearance side of things, I would say that I’ve only partially succeeded.   I think the shape and surface texture of the individual carrots is appealing, as are the strings of tiny bubbles in the largest specimen jar.

However, I think the outer shape of the specimen jars isn’t refined enough and I’m not sure whether the plinth was the best way of presenting them.  A glass shelf might have been better.

After I’d practically finished my project I came across these specimen jars by Steffen Dam in the V&A: 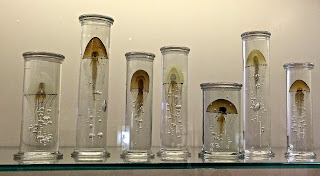 Their exquisite quality put me to shame – made my efforts look decidedly amateurish by comparison.   Yes, I know; Dam is a master craftsman with decades of experience whose work sells for hundreds of thousands of pounds so I shouldn’t feel too down-hearted (see my previous post).

Another measure of my project’s attractiveness (or not):  I submitted it for the Warm Glass competition and didn’t come anywhere.  In some respects, I think judging a 3D object from a single 2D photograph is a little unfair – particularly for projects such as mine, where it pays to look at it from all angles and also zoom in on details.  I’m not sure whether my photo (at the top of this page) was up to scratch.  I took it myself using the college’s studio.


As noted, I wanted my project to make people think as well as appeal to them aesthetically.

To start off with, I wanted people to think about abnormalities in a number of different ways – why they are squeamish about eating anything other than perfectly shaped fruit and vegetables, how they feel when encountering humans with deformities, whether they feel as though their own bodies have imperfections.

I think my artwork addresses this quite well.  At first glance, the hollows look like medical specimens of some sort, in formaldehyde (echoes of Damien Hirst?).  The plinth with the Latin inscription on it reinforces the perception that they’re something unusual that deserves closer attention.

Closer inspection reveals that they are misshapen carrots, and then I think people see them as a metaphor for human deformities and imperfections.

Up until fairly late on in the project, I called it “No One’s Perfect,” implying that everyone probably has some secret hang-ups about their bodies.

In the end, I changed the title to “Ghosts” after pondering over existence/absence – the fact that carrots were no more and yet the space they once occupied was preserved.  They were ghosts!  They even looked like ghosts!

I think the existence/absence angle works really well and lends itself the philosophical navel-gazing much loved by the art world.

I think it chimed with artist Marie Toseland when I showed her my project in a tutorial.  Earlier on, Marie, had talked about one of her installations, “Being and Nothingness” – a melting block of ice in front of a collection of large loudspeakers (see my previous post).  I see some parallels with my carrots’ presence “in spirit”.

Marie is also interested in hidden surfaces, like the inside of her mouth, and sex (expressing it in her work!). She agreed with me that my project pressed similar buttons.  The carrots aren’t there but their surfaces are.  They are penis-like.

A lot earlier I also showed this project to Antoine Lerperlier, a very different artist from Marie Toseland in that he takes great pride in his craftsmanship and the quality of his work.  (Marie quite candidly admits she’s poor at making things).  Lerperlier has some similarities to Steffen Dam, in that he traps bubbles and other items inside glass.

One piece of advice from Lerperlier proved pivotal in this project.  I had been struggling to polish the surfaces of my first specimen jar and lecturer Glen Carter had remarked that he quite liked the idea of a translucent, ground surface making the interior more mysterious.  I didn’t really agree with this because I’d put so much effort into recreating the surface texture of the carrot, but I liked the idea of avoiding endless hours of grinding.  Lerperlier said I had to polish the surfaces and that was sufficient for me to keep going.  The right decision, I am sure.

I would classify the other suggestions made by Lerperlier concerning my work as food for thought – ie, I looked into them in detail and decided I wouldn’t take them up.

In some cases I disagreed with him on the aesthetics.  For instance filling the carrot hollows with a colour, which I think would have destroyed their ethereal, ghost-like, qualities.

In other cases, I thought his ideas were impractical.  For instance, fusing the pieces of the specimen jars together by heating them in a kiln.  I discussed this with experts at Bullseye in the U.S. who strongly advised against it, saying it would destroy the surface detail of the carrots.

I thought hard about bonding together the pieces of the specimen jars and in the end decided against it, for aesthetic and practical reasons.

Aesthetic: I found that handling the individual pieces of each specimen jar was pleasurable – it introduced another sense beyond the visual.   I might take this discovery forward in a future work (see below).

Practical: If fusing was out the other option was glue – much frowned on by Lerperlier.  I frowned too!  As I saw it, if I used a small amount of glue I would be able to see it in the join; if I coated the whole surface of the join then I wouldn’t be able to stop the glue dripping down inside the carrots, spoiling their glistening surface texture.

While working on this project I was encouraged to treat it as a starter for a series of sculptures.

At the time, I dismissed this, partly because of the huge amount of time and effort that went into this project, partly because I don’t have a great interest in trying to sell my work,  and partly because there’s so many other things I want to create.

However, an interesting idea was floated when I asked fellow students to criticise the end result of this project on Facebook; namely that I should encourage people to address their squeamishness concerning deformities by encouraging them to pick up and handle my artwork.

I’d noticed that picking up and handling the pieces of glass forming my specimen jars is a pleasant experience, which has got me thinking.

Obviously, people can’t pick up and handle the deformed carrots in this project because the carrots are no more.  But maybe I should make some positives of deformed carrots, place them on a velvet-covered cushion and invite people to pick them up?

One attraction of this idea: I might get away with doing no grinding and polishing!