Another example of how maths can underpin art!

In this case, it's Dail Behennah, who gave a really good talk at Plymouth College of Art on 4th November.

Up until recently a lot of Dail's work has been 3D grids of willow sticks following some quite complicated geometries.   In her talk she called them "op art".   Here's an example: 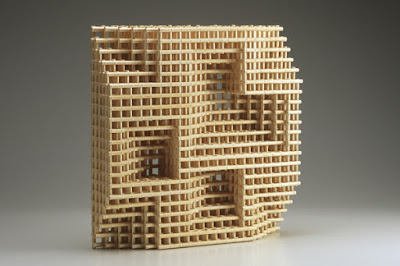 "My work is about line, light and shadow," says Dail's statement on her website.

"I always try to bring to it a sense of calm, but not stillness," she adds.  I think she achieves this by rigorously following geometric patterns with a very high degree of precision.

It's also achieved by making the fastenings (silver plated pins in the above photo) a feature of her pieces, so, as she puts it, "the method of construction is open and honest." I like it!

One of the things that intrigued me with some of Dail's 3D grids is that they have inflexion points - positions where the view of them suddenly shifts as one plane comes into view and another one "hides itself" in the grid.

Dail designs her grids by hand so it must be almost impossible to visualise where these inflexion points might occur until she's made the piece.

This reminds me of something I made more than 40 years ago - block wave, a series of little wooden cubes cut so they create a row of twisted columns.  I drew attention to the twisting by painting the sides of the columns in different colours.  What I didn't realise until I'd made it was that it also created diagonal waves in each colour, across the work.

I've toyed with recreating this in glass, and Dail and I have exchanged a couple of emails about this idea (and other stuff).  She thinks the refraction of the glass could create some really interesting effects.  I think I'll take this forward when I've got time.

Back to maths and art.  In one of her emails, Dail says her maths "is instinctive not formal", which reminds me of M.C. Escher and his collaboration with Professor Sir Roger Penrose, an eminent mathematician.

Escher thought he had no mathematical ability but was able to express highly complex mathematical concepts in his woodcuts and lithographs according to a September 2015 programme on BBC TV.

UPDATE 16/Nov/2015:  I've now launched a project to make a glass version of block wave - here's a link to a page on my website about it.